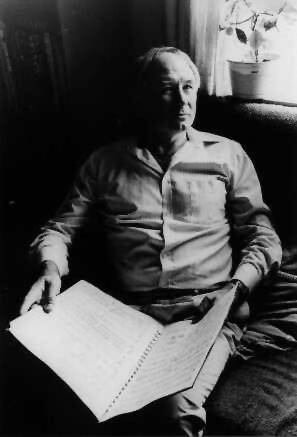 PIANO TRIO NO. IN F by Derek Strahan

This work was commissioned by The Sydney Ensemble as a work to be performed on Australia Day (January 26) 1988, as a contribution to the Bicentenary celebrating two hundred years of European settlement in the continent which became known as Australia, dated from Captain Cook's First Landing. It was performed at a Champagne Breakfast given in Centrepoint Tower, the highest vantage point in Sydney from which to observe the events staged on the waters of Sydney Harbour involving a spectacular sail past of many different kinds of sailing vessels. It was given a second performance later that day at a Champagne Lunch. It was also recorded for broadcast on national radio by the Australian Broadcasting Corporation (ABC) and by Sydney's finest music station 2MBS, at a live performance during Oz Music Week. This performance was released on a JADE CD, "Autumn Pastorale" JADCD 1059. See CD Catalogue

The circumstances of the first performance influenced the nature of the work. I judged that it should be a tuneful and celebratory piece. Nevertheless, the conceptual process began with some considerations of historical and political context, as indicated in the following notes, which were written as a preface to the music score.

The twin concepts of Freedom and Equality are simple to state and to describe. However, it has proved extremely difficult for the delinquent human race to apply these concepts, given our tendency to evolve social organisations inspired by greed and designed to protect and serve the interests and privileges of entrenched minorities.

So far as we know, it is only during the last 200 hundred years that the human race has made any serious global attempt to outlaw unjust practises based on discrimination against people on the basis of class, caste, race or creed. This novel experiment in social justice began in Europe during the eighteenth century with a movement known as the Enlightenment, which provided the philosophical basis for the French Revolution. The experiment continued in the American Constitution, and still continues today. It is a fragile venture, by no means assured of success. Everywhere in the world we see attempts to retain or revert to social systems which deny absolute Freedom and Equality in law to all citizens.

The period of this rare social endeavour coincides almost exactly. with the existence of the Australian nation, as defined by the period of European settlement. It is ironical, therefore, that the majority of the first Europeans were brought to Australia in chains, and that these same Europeans and their masters immediately set out to enslave and debase the original inhabitants of the continent. However, this kind of behaviour was quite consistent with the known behaviour of the human race over the previous six thousand years.

Despite this sad beginning for modern Australia, I believe that the Bicentenary is worth celebrating, if only for this one reason: Australian society is still evolving, and Australia is one of a handful of nations which are still trying, against the odds, to define and protect basic, universal human rights for all citizens. Our efforts may be clumsy, but we are trying, and we do enjoy freedom of debate over how to give practical expression to:these elusive ideals.

It is my wish to celebrate these ideals in music for Australia, as indicated by the titles given to the movements of my Piano Trio No. 1 in F. In doing this I am continuing a practise begun 200 years ago by, among others, Ludwig van Beethoven, who explicitly furthered the ideals of the the Enlightenment in many of his compositions. In 1788, Beethoven, aged 18, was absorbing the new politics of his age, through friends and tutors in Bonn, most of whom were members of a radical sect of Freemasonry known as the Illuminati.

Beethoven remained true to these ideals throughout his life. Most Australians would understand Beethoven's reaction when he heard the news that his former democratic hero, Napoleon, had declared himself Emperor. In a fury, he erased Napoleon's name from the title page of his "Eroica" Symphony, saying: "Is he then nothing more than an ordinary human being? Now he, too, will trample on all the rights of man and indulge only his ambitions. He will exalt himself above all others and become a greater tyrant than anyone" History has repeated itself since that event, and Beethoven's words (and his music) are as relevant as ever. In writing my Piano Trio, I pay homage to Beethoven, and composers following him, who have celebrated and perpetuated the desire for freedom.

For the above reasons, this work is neo-classical, and in the form of a traditional Piano Trio of Beethoven's time, which is also the time of Australia' s First Landing. I have made no concessions to academic concepts of what "contemporary" music should sound like. The work is full of tunes.

This movement in sonata form has a broad melody as its first subject. The second subject is a cheeky jazz-based tune which gives the music a twentieth-century reference. In the development section, various attempts are made (no doubt by the enemies of freedom!) to stop the first subject being played. These futile attempts at repression and censorship do not succeed, and the first subject returns for the recapitulation. There's a surprise when the second subject is re-stated. We find that, all along, it has been the counter-melody to a well-known Australian folk-song ("Click Go The Shears"), which takes over to bring the movement to a close.

Australia today is a multicultural Society, and in this Scherzo & Trio we hear rhythms and melodies which echo the music of Eastern and Southern European cultures. These regions produce fascinating songs and dances, which are widely played in ethnic communities throughout Australia. I was reminded of this when I was invited to judge a Macedonian Song Contest at the Marrickville RSL Club. My enjoyment of that evening is reflected in this movement. The Scherzo is 9/8 time (subdivided 2;2;2;3), the Trio is in 5/8 time. (Re: RSL Club, see note below - **)

It might seem a little obvious, giving such a title to a movement of chamber music. In an opera you can have love music, and call it that. But in chamber music ? Isn't that supposed to be abstract music ? Let me quote what Clara Schumann said to Brahms about a movement of his Violin Sonata in D minor. "I love very much the third movement which is like a beautiful girl frolicking with her lover - then suddenly in the midst of it all, a flash of deep passion; only to give way to sweet dalliance once more." As programmatic content for music, this seems to me quite acceptable! I should add that Brahms and other composers of the Romantic movement, wrote love music in an era when love for love's sake was regarded as a subversive idea. The right to fall in love with anyone is a democratic right, only guaranteed by a society in which there are no class barriers. We have that right in Australia. It's a freedom we should never take for granted.

4. THE PURSUIT OF HAPPINESS. The fourth movement is a little soufflee, a passing moment. Many of our moments of greatest happiness are like this. Gone in a flash. We value them in retrospect. The main theme is in 6/8 time, as were many of the light-hearted Rondo finales of Haydn, Mozart and Beethoven. But this movement is not a true Rondo, as the main theme is heard only twice (instead of the obligatory three times). The contrasting section begins as a melancholy, almost mediaeval melody, which is transformed into something more joyful. The brief Coda re-asserts our right to happiness, and to the enjoyment of life.

Post script - The academic establishment , if one can refer to this as a collective, took as dim view of this work, as revealed in a comment passed on to me by the then Director of the Australian Music Centre. It was made by an anonymous assessor in the context of my application in 1988 to become a represented composer of that body. The remark was: "Oh, that was just cafe music". The Director then correctly observed to me: "But of course that's exactly what it is." I agreed with him. The Piano Trio certainly was written as a Divertimento to entertain guests, which it seemed to do quite effectively at its first performances.

My sin was to present "Cafe music" as a work worthy of serious consideration. My punishment was to be accorded only Associate membership. That remained my status for the next five years, by which time I was able to submit a couple of less frivolous works for the consideration of academia, or its fellow travellers.

The Australian Music Centre now has a more eclectic approach to composer assessment.

**RLS stands for Returned Servicemens League. The clubs are an institution, for long open to membership by the general public, kept afloat financially by poker machines, providing many popular social services, including sensibly priced food and popular entertainment.